My idea of a good trip is one where I get to snap interesting photos. In that respect, last weekend’s choir tour had a bit of a rocky start. I spent the first half of Friday rushing to get everything ready for my departure and the second half in enforced immobility, sitting on a bus. I had some excellent conversations with some excellent people, and got a start on the weekend’s main work of growing closer to my fellow choir-members. But of photo ops, there were none.

Saturday left my camera almost equally cold. Between performance and bus transit, we saw very little that warranted photographic memorialization. This is largely because we spent the day enjoying the offerings of northern Arizona, and after thirty four years here I’m so tired of the Arizona landscape I could spit. I could have, I suppose, snapped some souvenir pics of my fellow singers, but I’ve accepted that when it comes to taking pictures of humans, it’s a job best left to someone else. I always bungle it in some embarrassingly artless way.

My friends back home in the Valley texted me that they were missing me at brunch. I told them I was busy touring like a rock star and hanging out with my new groupies: 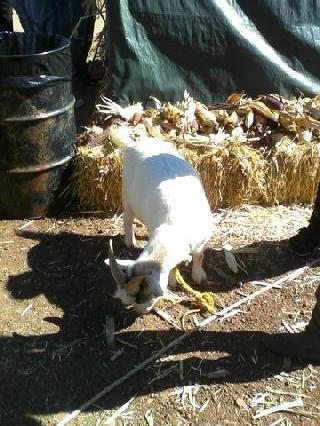 random inexplicable goat, but I guess I shouldn’t be picky about my groupies

We concluded the day with a turn at the Safford County Fair — big-time doings, let me tell you. (I shouldn’t sneer, I know. It was fun, actually.) But given that I really didn’t see any need to photograph the endless — literally endless — supply of toy guns, purses and belts with guns on them, or other gun-related paraphernalia, there really wasn’t much to shoot there either. I did again spend some quality time talking to and getting to know my fellow travelers. Which, by this point, was conspicuously out-of-character enough for me that I was starting to feel weird and exhausted. The fact that I’d only slept a handful of hours over the last couple days also contributed to that, I’m sure.

Sunday was to be another long day on the bus, broken up principally by two stops before our final concert of the tour: the Titan Missile Museum and the Arizona-Sonora Desert Museum. Both, I thought, were pretty random choices for a choir on tour, but whatever. It was nice to get out and stretch the legs.

I didn’t know exactly what to expect at the TMM. What we got was an unnerving look into the realities of life during the Cold War. I think any and all joking done on tours down in that launch facility is done to keep the vague, pervasive sense of unease at bay, but it never goes away entirely. It’s quite literally a time capsule, a frozen moment from a time when we were expecting to receive the news at any moment that a nuke was incoming and we were all about to die of Communism. 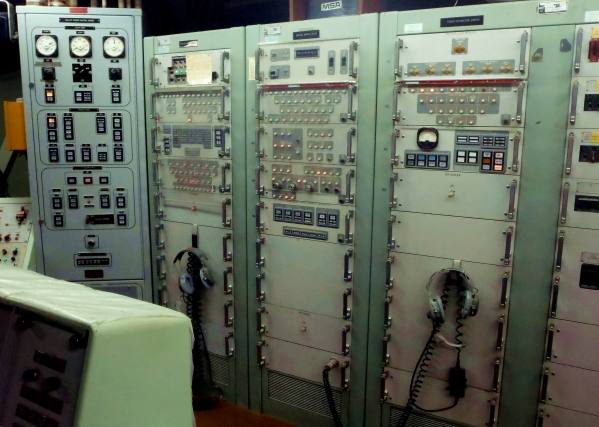 the Control Room; it’s so Cold War in here you expect to bump into Karl Stromberg 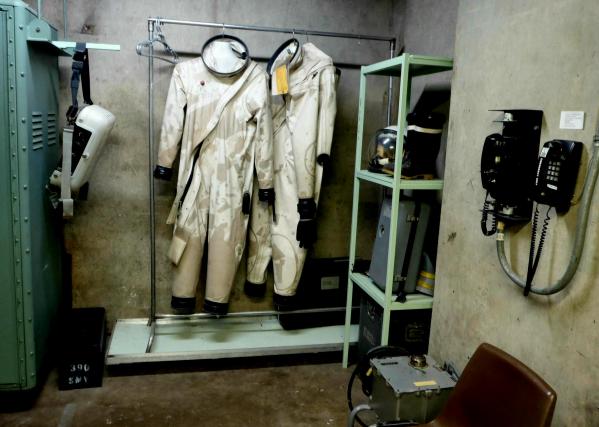 yeah, I can totally see how those little suits would save you from a nuclear blast 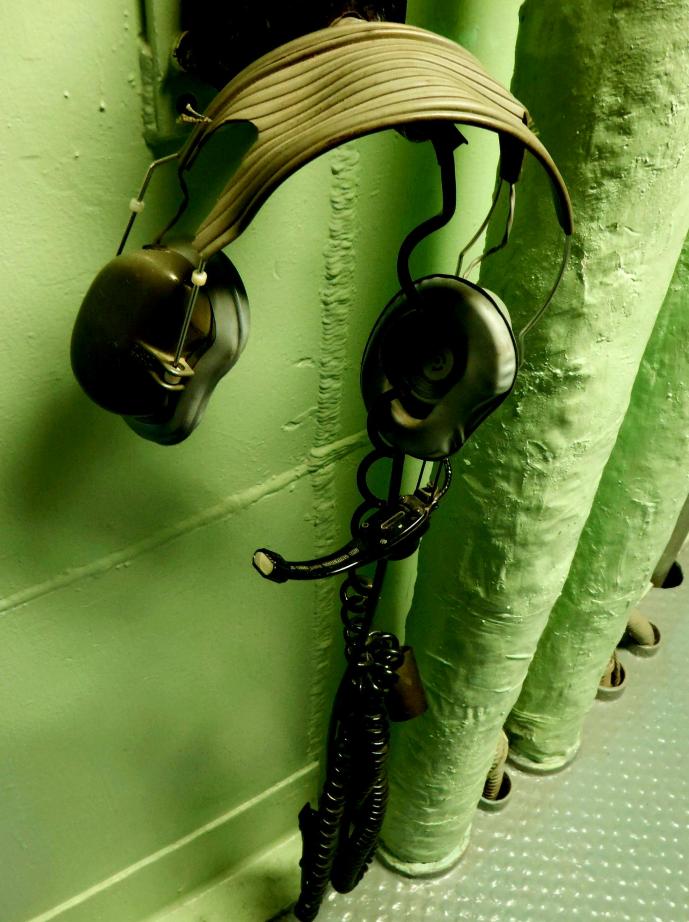 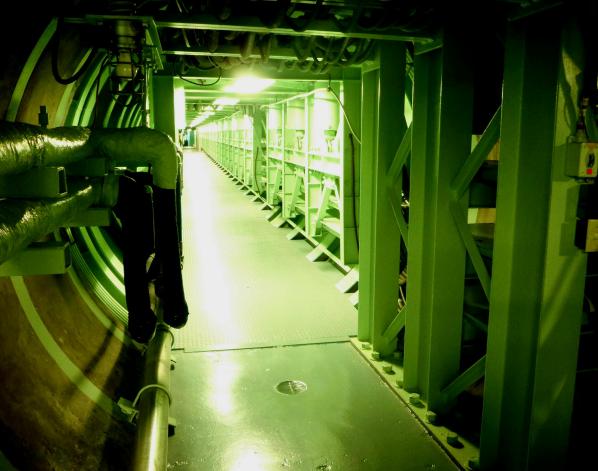 Of course the facility tour is bringing you toward the grand moment: seeing the actual (decommissioned) nuclear warhead. Let me tell you, it does not disappoint. It is mind-bendingly large. 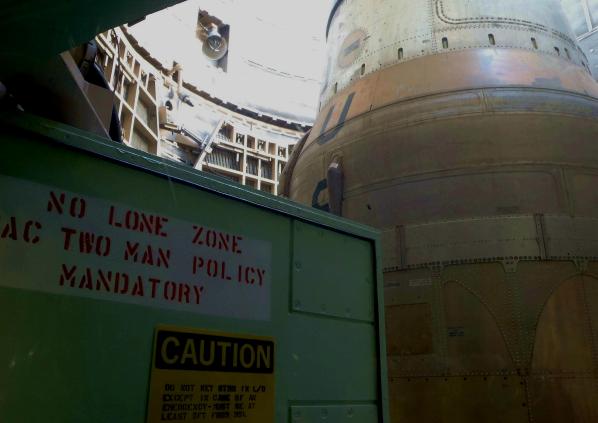 just a tiny glimpse of only the tip

I really just can’t even.

Snapped on my way out: 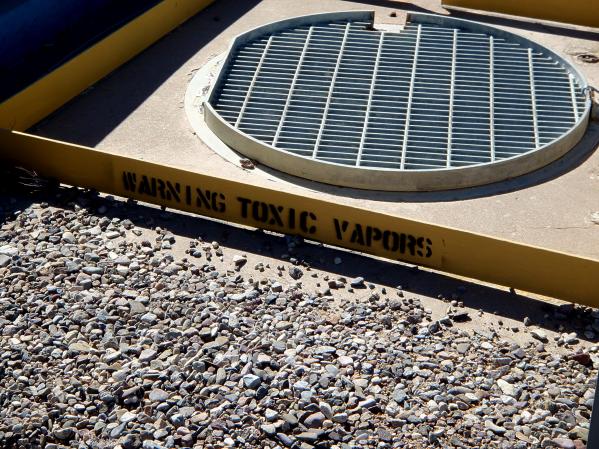 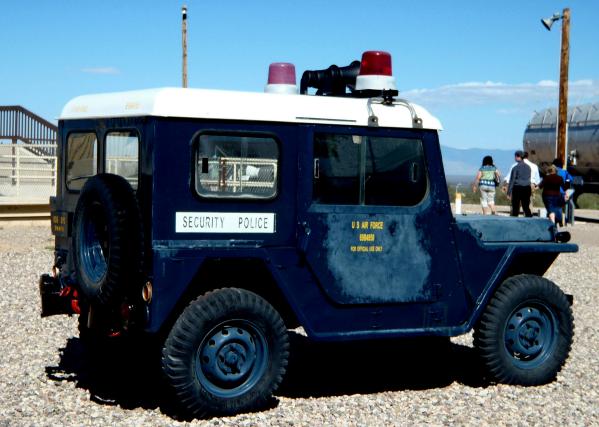 Up in the gift shop, I couldn’t decide which of these signs was most appropriate to buy for Tim: 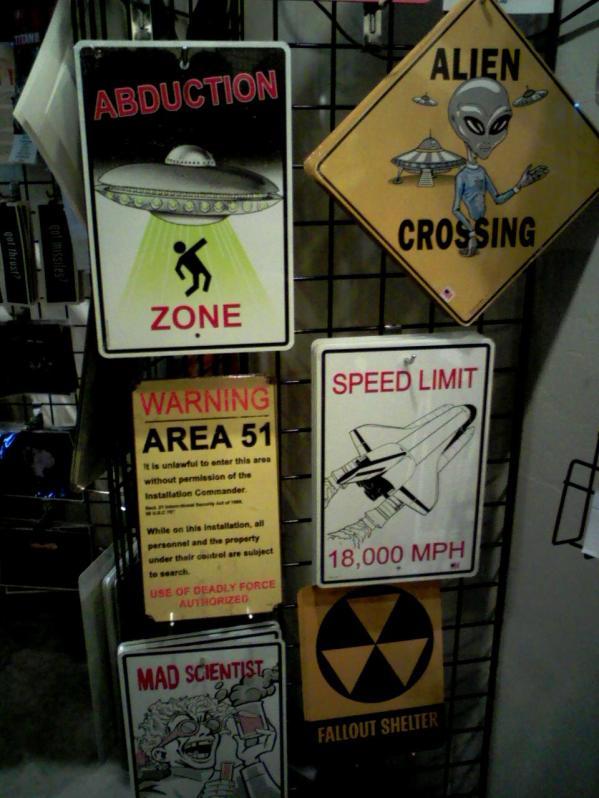 For my own souvenir, I settled on this book. Tim believes it signals a budding allegiance to Hydra: 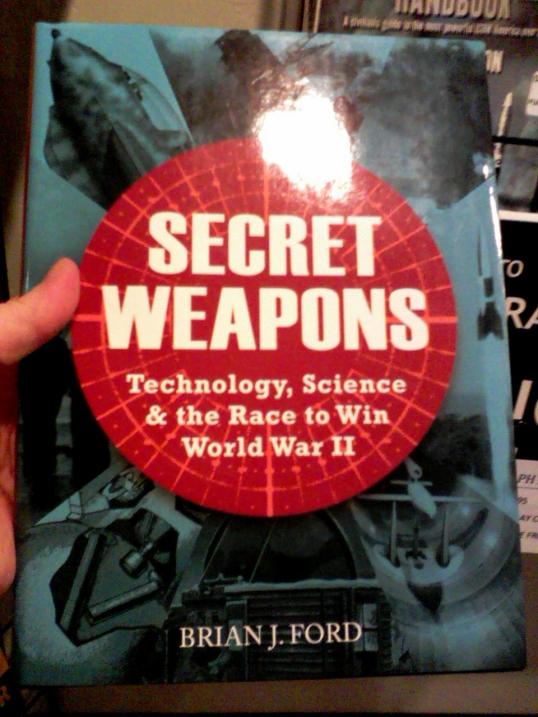 Cut off one head, two more shall appear!

Then it was back on the bus to mull over everything we’d just seen as we made for the Arizona-Sonora Desert Museum. To be honest, I was and remained unenthusiastic about this stop. See above for my feelings on the landscape of Arizona. I had, however, acquired by now a perfectly lovely new friend. (And discovered that, however improbably, we have lived less than a mile away from each other for eight years. She’s wonderful and so very fun to talk to, about the kinds of things I don’t regularly get to discuss anywhere other than the internet.) We found ourselves a scenic spot on the café terrace and she did her required reading while I rather shockingly got some actual work done on the novel.

I did get a couple of photos here, though. 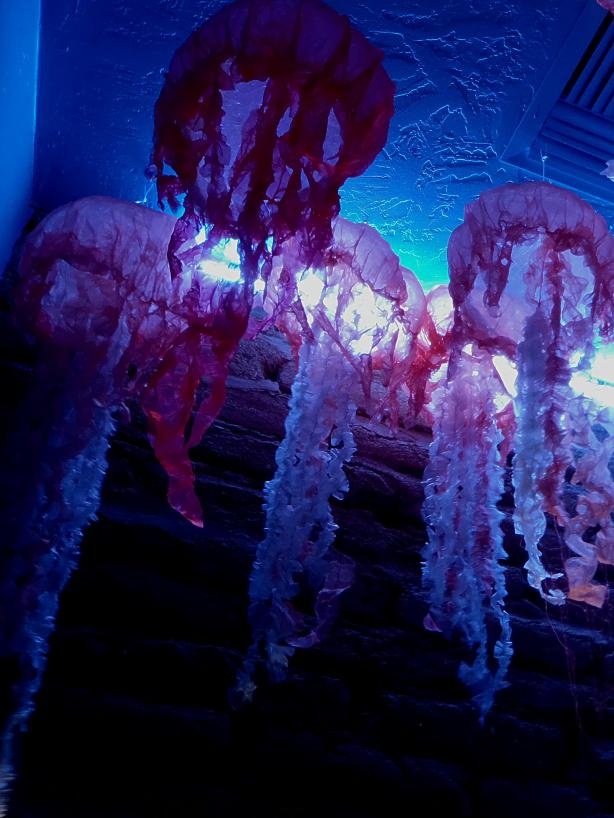 I’m pretty sure these aren’t real 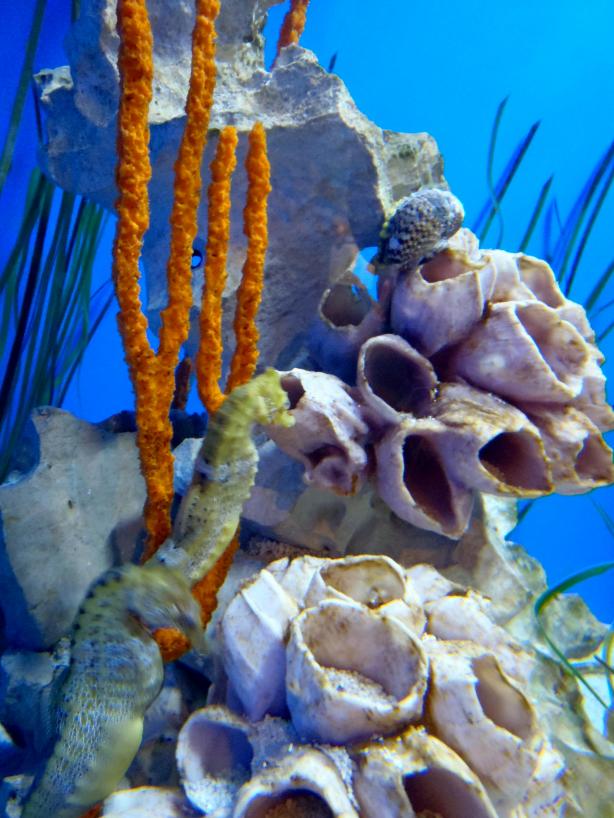 I didn’t realize we had seahorses in Arizona 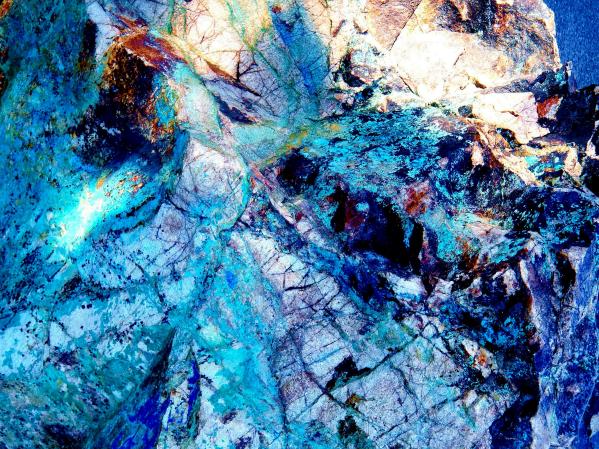 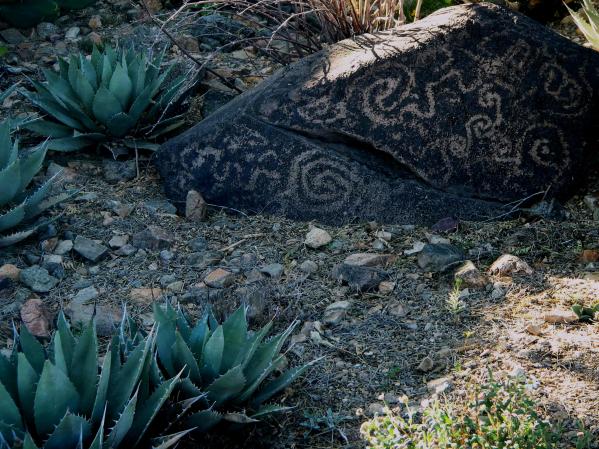 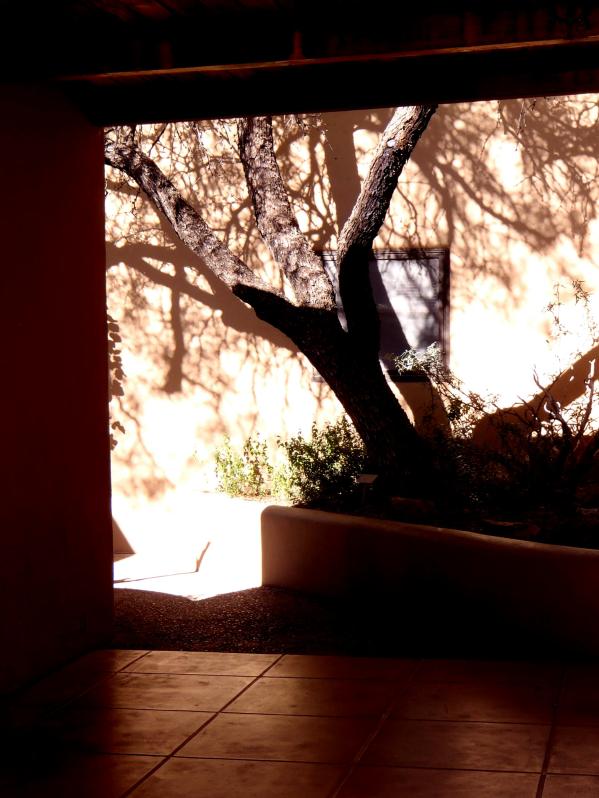 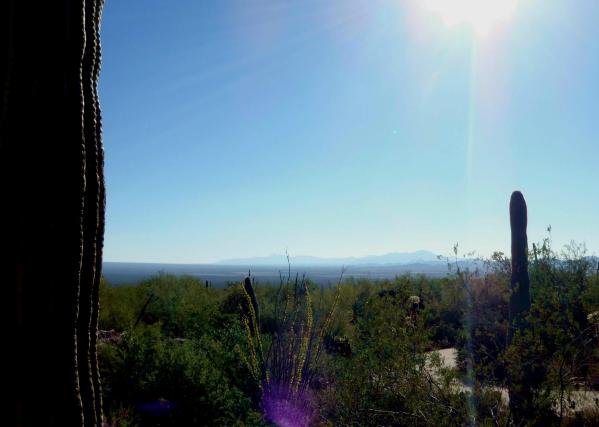 the view from our terrace; apologies for the hipstery lens flare

And while this is not a quality shot, I can’t escape this post without adding this little gem: 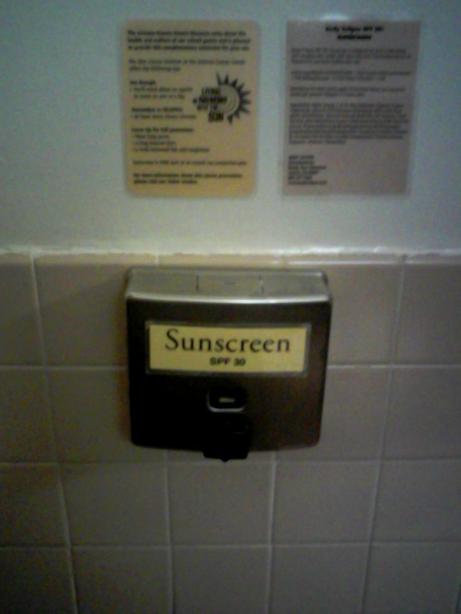 Back on the bus. Our driver was a maniac. I’m pretty sure she was trying to catch air as she navigated the hills into Tucson. We were all just a little seasick when we arrived at our concert venue.

And there, despite the lack of photographable material, I had my most memorable experience of the entire tour: one of those performances that remind you why you sing with a choir and not solo.  Where it may not be perfect, but you’re so inside each other’s mental, emotional, spiritual, and musical headspace that you’re not thirty people singing the same song, you are a choir, making music. You’re just, there. Together.

The ride back to the Valley was subdued, not only because we were all exhausted and so done with being on a bus. But for a little while after that concert, I felt, we were still a choir, not thirty tired people on a bus. It was the quiet of camaraderie, of not having to say much.

On Thursday, our first rehearsal together after the tour was strange. A little shy, like we all knew we’d maybe bared too much, a little giggly to ameliorate the awkwardness. But still touching the edge of that oneness we’d found. It will fade, I fear, over time. But we did get there, and we know in the backs of our minds that we can get there again under the right conditions.

The answer to the question “Did you have a good trip?”