That is to say, what I am is a writer not a typesetter, a publisher, a business manager, a publicist, a social media coordinator, or any of the numerous roles I’ve taken on in order to get Mornnovin published and out in circulation. I absolutely respect the work that publishing houses do in order to fill the world with books. I’m just a storyteller, a painter-with-words.

In short, I really don’t know what I’m doing.

AND YET. Somehow, despite my ineptitude, physical copies of my book are being printed as we speak and will shortly be on their way to me, and I think they look pretty damn good. I’ve completed all but one last reward for my Kickstarter backers (and that one is only still incomplete because I was working on it and it broke and I had to start over.) I’ve set up my author profile on Goodreads. I’ve done the necessary official business with the copyright and my publishing imprint. I’ve set up an ad for the book in the upcoming Ingram Advance catalog that bookstores and libraries do their ordering from. I’ve already made contact with my local library about scheduling an author event. I’ve set up global distribution for the eBook through the following (rather extensive) selection of online retailers:

The paperback book release is currently set for April 9th — just in time to be the best birthday present I’ve ever had. I was pretty damn excited when I checked on a couple of those sites to see if they’ve already gotten the listing memo and I saw this:

Apparently they have it on a special sale for some reason, so maybe jump on that.

So… this is happening. I’m publishing a book.

But because I’m just a writer and all of those other things are way, way out of my wheelhouse, I’ve been so consumed by the one primary task of making the physical book (and the eBook) happen that it has only just now entered my sphere of awareness just how profoundly I’ve neglected to do any of the sort of pre-launch publicity I ought to have been doing. Like. To the point where I don’t even know what pre-launch publicity I would even do. I just haven’t had the focus to spare for any thoughts of what would happen once I’d made the book become real.

I guess I’d better wander off and try to figure out how to promote this book in the little time I have left.

But not without a final squee.

The proof copy of Mornnovin was supposed to arrive today, so I was pretty excited as I checked the mail. In fact I opened the door, looked down, saw a package, and literally squeaked.

Let’s get this bad boy inside!

Well that does look pretty book-shaped. Let’s see what– 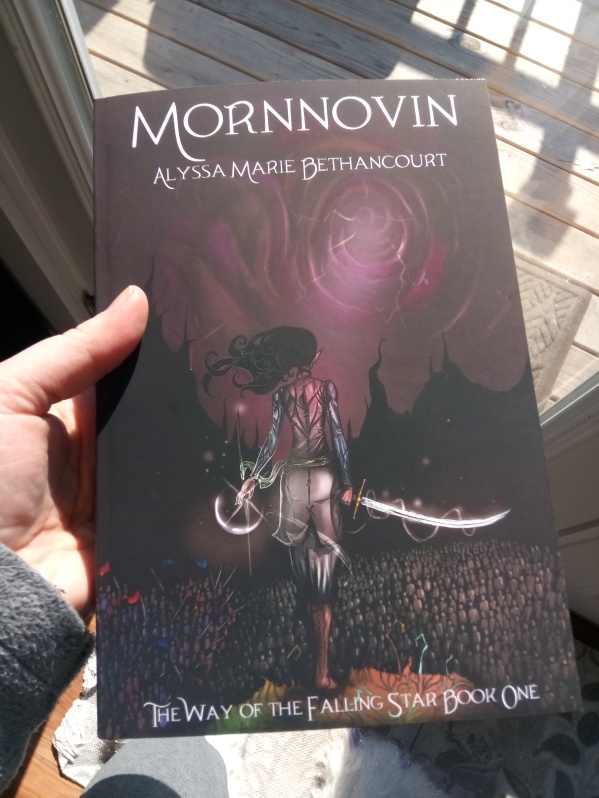 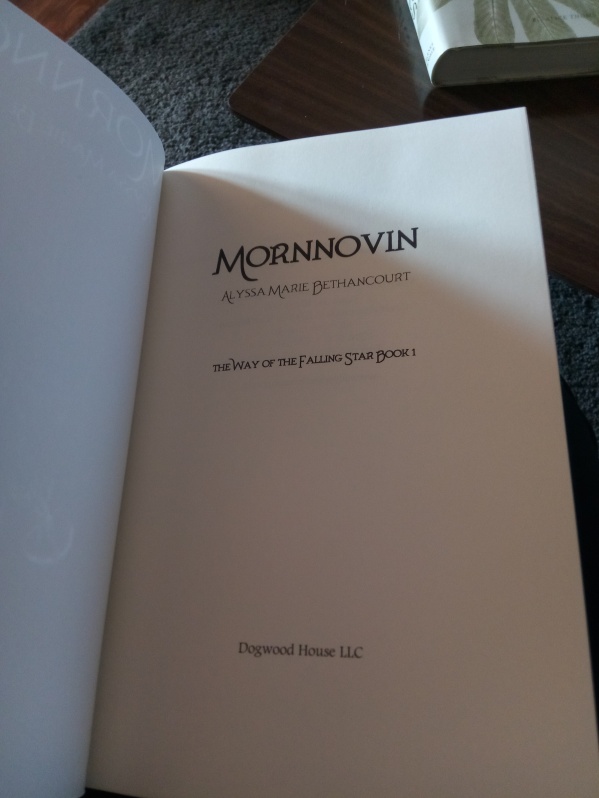 THIS IS MY BOOK. WHAT THE FUCK‽‽‽

I made a book and I am not calm about it. You must excuse me while I go hyperventilate.

Having shared this first with my backers on my Kickstarter page, and then having taken a moment to finish screaming, I’d like to announce that my debut novel, Mornnovin, has a (tentative) release date of April 2nd, 2019.

This is obviously tremendously exciting. There’s still a lot to be done and shockingly little time left in which to do it, but let’s just all scream together for a moment, yeah?

So, yeah. Stay tuned for more about this VERY EXCITING thing that is happening. Like, I’d actually like to do a post about the backer rewards I’ve made, because I’m pretty proud of them and I want to share, but for right now it’s all about the fact that at this very moment, somewhere in the world, a physical copy of my novel actually exists and is in the mail on its way to me for my final approval, and how that’s so surreal and wonderful that I can hardly breathe.