From the Kickstarter fundraising campaign for Trajelon: the Way of the Falling Star Book 2, Sunday March 1st 2020:

We have now, in one fell swoop, passed both the 50% mark AND the oh-so-satisfying $2000 line. Now, when I check the stats page, it looks like this:

One thing that I think has been successful in enticing new backers has been when people sharing the campaign talk a little bit about the book – either this one or Mornnovin– and what it is that draws them to this series. A simple share of the link leaves people wondering, “Okay, a fundraiser – so what?” But if you can personalize the message it has more impact.

Are you super into elves? Seeing autism represented in the fantasy genre? Complex female protagonists? Do you love these characters and need to see what happens to them next? Are you intrigued by the notion of genre fiction about the themes of trauma and depression? Do you feel strongly about supporting independent artists? Have you known me since elementary school, and you remember fondly the stories I used to write back then and how much I dreamed of being a published author one day? Have you thought of someone in your life who you KNOW would love this series and you just need them to see it? Let people know why you’re invested!

For me, these stories have always been about the characters. It never stops being a delight as a writer when a new face turns up on the mental scene and I find myself getting to know the ins and outs of another cast member. Trajelon sees the arrival of several new characters, as well as more time with old ones whose acquaintance we only just made in passing in Mornnovin.

Someone we didn’t get to see much of last time around who has more to do in Trajelon is the buttoned-up authority figure in charge of the elven kingdom of Evlédíen, Tomanasíl Maiantar. 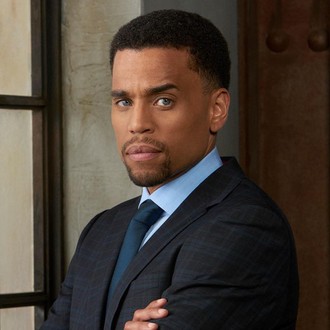 Michael Ealy doing a Tomanasíl Maiantar face. Imagine, if you can, clean-shaven with elf-long hair.

You wouldn’t necessarily know it, because he doesn’t talk about himself much, but Tomanasíl has had sort of a rough deal. A quiet man, a thinker, a steward of rules and tradition and order – all he wanted, really, was a life of anonymity and quiet contemplation. All of that went out the window when he fell in love with the vivacious and chaotic crown prince, Gallanas Raia. And then his life changed again, in a dramatic and unpleasant way, when the prince up and disappeared on him after the king and queen’s deaths, leaving him in deep way over his head as Lord Regent of an entire kingdom and guardian to the only surviving heir to the throne.

He didn’t have any idea what he was doing as Regent or as the sole caretaker of a stubborn and willful elf princess who would be expected to grow up to carry on the legacy of her entire ancient family, but Gallanas had made him promise to take care of his sister and Tomanasíl was not about to let him down.

Now Loralíenasa is grown and ready to assume the throne that Tomanasíl has safeguarded for her all these years, and there’s an understandable tension between the young queen and the Regent who raised her.

Isn’t it always true that no one can drive you quite as crazy as your own family?